To All members of ALCYONE CIRCLEJune 14th, 1985

During the 1985 spring meeting in Amsterdam, it was agreed that we might work out a preliminary programme for a 1986 rally of the CIRCLE to Germany.

We have compiled our suggestions and ask you to have a look at the attached itinerary. We worked out two alternatives for Waddenzee-freaks as well as for those who prefer inland sailing. The occasional bluewater-sailor may find his own way, e.g. via the Delfzijl-Helgoland-Cuxhaven route.

We are prepared to meet the fleet at Delrzijl and sail with you through the Waddenzee- route to Neuhaus, so that also the less experienced may safely take this attractive and sheltered but sometimes navigationally tricky fairway.

We should like to suggest that we discuss the plan, dates and further details during SAIL AMSTERDAM ‘85. Perhaps you may make up your mind until then whether you (and your crew) should like to participate in such a rally or rather not.

We do hope many of you will come in 1986. See you all in Amsterdam in August.

1. General information
During the spring meeting of the CIRCLE in Amsterdam 1985, we discussed the plan of a rally to Germany in 1986. It was generally agreed that this might be a fine idea. Further information is now issued to all skippers, so that definitive arrangements and dates can be fixed at the SAIL AMSTERDAM ‘85 meeting in August.

2. Destination
Neuhaus/ Oste is a harbour village of 1,700 inhabitants, situated on the banks of the Oste river, about three nautical miles (nm) from the Elbe river and about 14 nm from the port of Cuxhaven. The Brunsbüttel entrance lock of the Kiel Canal, the gate to the Baltic Sea, lies some 10 nm away. Neuhaus has a picturesque old port with a fine shipyard and a modern, but quiet, yacht marina providing all amenities to mariners.

We shall try to co-ordinate the rally dates with the traditional Neuhaus Port Festival with many sailing and social activities. In any case, we shall take care of adequate entertainment for all crew members during their stay here.

3. Routes
As our boats are designed for shallow water cruising, a route through the German port of the “ Waddenzee” would seem most appropriate. In general, the German “ Waddenzee” is smaller, narrower, and more sheltered that the Dutch tidal waters, and perhaps also easier to navigate. Furthermore, it is suggested that the fleet should meet at Delfzijl, and that we all shall sail as a safe convoy to Neuhaus, so that skippers who might hesitate to sail this distance on their own may be guided by the more experienced ones, if necessary.

Alternatively, there is a very pleasant route using the German inland waterways system, with almost no commercial traffic at all. Masts must be lowered at some points.

4. Closing remarks
Detailed information on customs regulations (very easy), advisable nautical material (charts, etc.) shall be issued to interested skippers in Amsterdam in August. Hoping to meet you all in Amsterdam ‘85 and in Neuhaus ‘86. 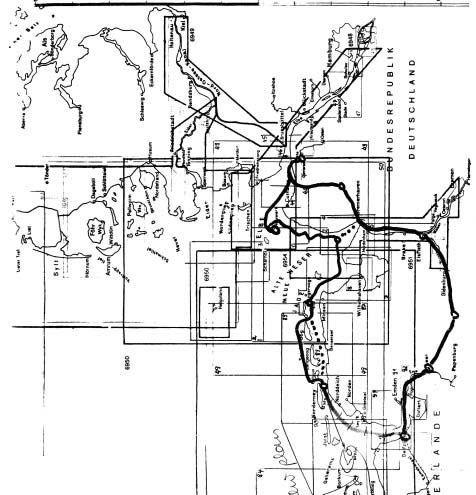