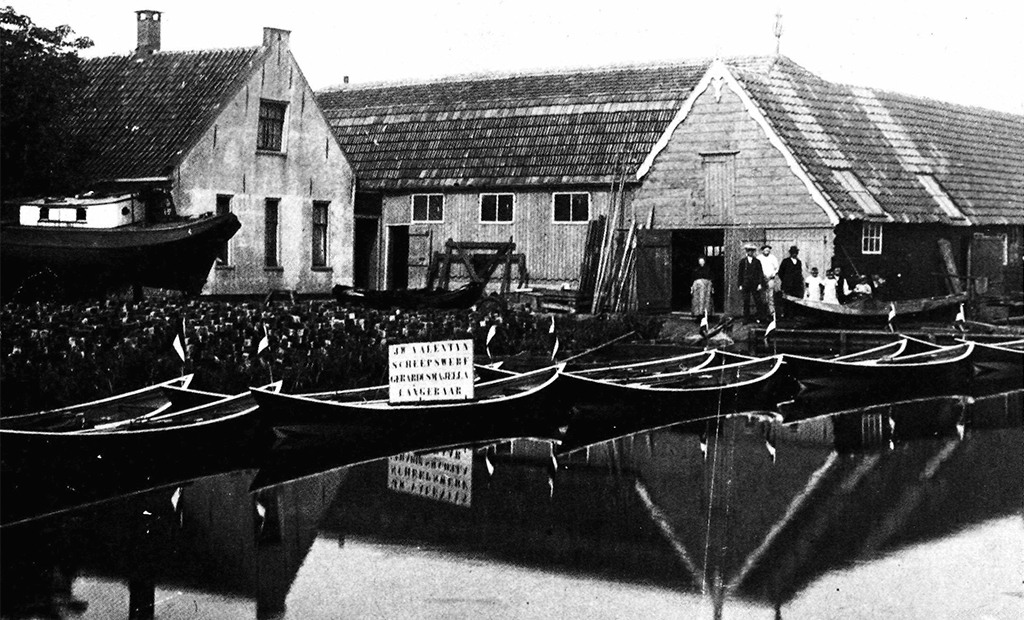 The shipyard around 1916, three years before father J. W. Valentijn took over. In the days many boats were built for renting purposes.

Johannes Willem Valentijn (1888 – 1937) was a shipbuilder and
founder of shipyard J.W. Valentijn, named “Majella”, on the Woudsedijk in Ter Aar (Langeraar).

Valentijn Company
The history of Valentijn’s shipyard resembles that of many Dutch shipyards: it started as a ship yard for inland boats, then built one yacht, expanded after the war and became a shipyard for pleasure boats only, experienced a golden age in the sixties and seventies –fifteen men were working there at the time- but had to accept a slow decline after the collapse of the American market. The Valentijn shipyard was made great by the brothers Arnold, John and Wil Valentijn and they did more than just build (mainly steel-hulled) vessels. Their significance for Dutch yacht-building is, that they engaged Mr. M.F.Gunning, naval engineer and designer of the ‘modern, non-capsizeable flat-bottomed vessels’ as their company designer and exported many of his ships to America. Wil Valentijn , the younger brother, who has worked in the shipyard for ‘only’ 44 years, says: “In America the Valentijn shipyard is more famous than in The Netherlands,” and to prove this he proudly shows a copy of ‘Who is Who’ in which the shipyard and its management are described. There is however another Valentijn who is well known in the U. S. , that is Johan, the son of Arnold,  who made a name in sailing competitions. He is the designer of the latest American America’s cupper. 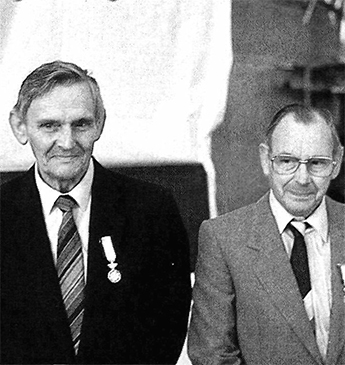 The brothers Arnold (left) and Jan Valentijn, connected to the Valentijn Firm for 55 and 50 years, were knighted last year.

Historical shipyard
Wil Valentijn likes to dig in the past of the yard. The oldest document he has found so far is from 1731: a bill for the construction of a vessel. On the spot where the shipyard is situated today, there always used to be a yard. Informer times mostly cargo vessels for the transport of peat were built. In 1910 Mr. J.W.Valentijn, a market garderner’s son, bought the yard for 4000 Dutch guilders and continued building and renting out vessels for the winning of peat. During the first World War he built 60 to 100 ton steel inland vessels for the canal shipping trade and in 1924 the first motor yacht was built and in 1932 the first sailing yacht was constructed.

The yard altered the rigging of this sailing yacht as late as 1973. This shows that such a yacht lasts a long time!

Modern flat-bottomed vessels are succesful
After the construction of the first yacht the future of the yard was clear: after 1925 no more cargo vessels were built. In 1937 father Valentijn fell off the roof and his children, the eldest son Arnold being 21 years old, and mother Valentijn, took over.
Only after 1947 the name Valentijn became well known, when a special type of flat-bottomed grundel was built, a modern flat-bottomed boat called Alcyone. The designer was Mr. M. F. Gunning, a naval engineer.  In 1950 its successor Alcyone II was built and in 1962 the Cormorant. In total fifty two vessels of this type were built.
In 1984 the last boat was launched. Now maintenance work and repairs bring in the money.

Grundels with and without pavilion
Mr. Gunning, the engineer who designed the vessels commended the merits of his modern flat-bottomed vessels in the British (!) magazine Yachting Monthly. He described them as comfortable, fast, safe and odourless, because they have no bilge. The last aspect is no longer so important. The three types Valentijn built are all of the ‘Grundel type’ and have a centre board. Because of their shallow draft they are excellently suitable for flats and lakes. Gunning meant to design vessels that could sail on all waters. The Alcyone II has a raised afterdeck, a so called pavilion, and because of that it is sometimes called a pavilion-grundel. Wil Valentijn still gets a dreamy expression in his eyes as he speaks about the sailing properties. He sailed a lot and on all kinds of seas. But also commercially the boats were ( and are) a success. He proudly narrates that one ship was sold three times by him, so that he earned more money in the form of broker’s commissions than from the original building.
He is honest enough to say that his boats were not cheap, because they used only the best quality building materials, a tradition they still stick to.
A Cormorant would cost 150,000.00 Dutch guilders these days, an Alcyone I 275,000.00 and an Alcyone II 300,000.00.
He does not quite understand the flagging interest for this type of yacht, it cannot only be because of the price. After all, the yachts are comfortable sea- going vessels that have demonstrated one can sail around the world in them. He does not say it out loud, but you can hear him think: bias is probably still the most important reason.
Examining Gunning’s modern flat-bottomed vessels, and also other modern flat-bottomed boats like the Schelde Schouw, one seriously wonders why interest in these boats went down so much. The boats are comfortable and have lots of possibilities. They undoubtedly have everything a yachtsman could wish for if choosing a boat with a centre board. Probably they prefer modern rigging and modern design. A ‘typical Dutch rig’ may be charming in America, in The Netherlands we prefer to use that for traditional flat-bottomed boats. Unfortunately the future of the yard is uncertain. There is still one member of the younger generation working in the yard, but Wil will retire in the near future and his brothers will follow soon. 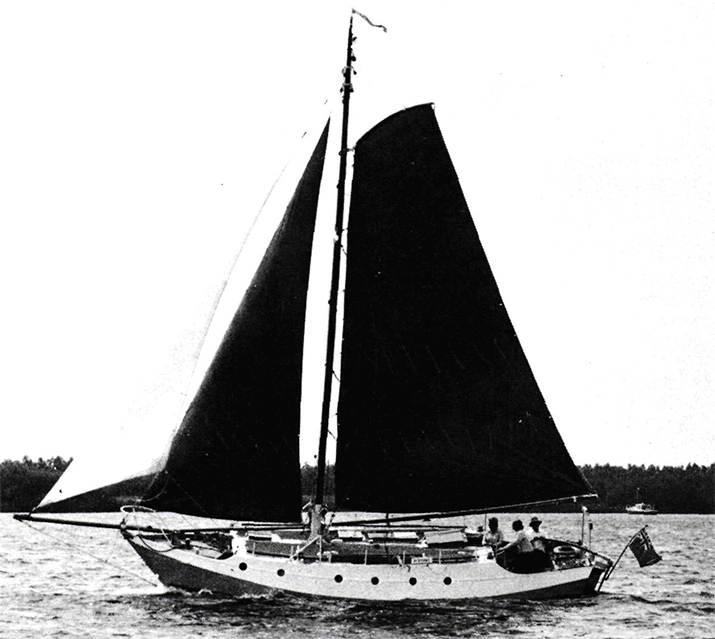 Opened out drawing of the Alcyone 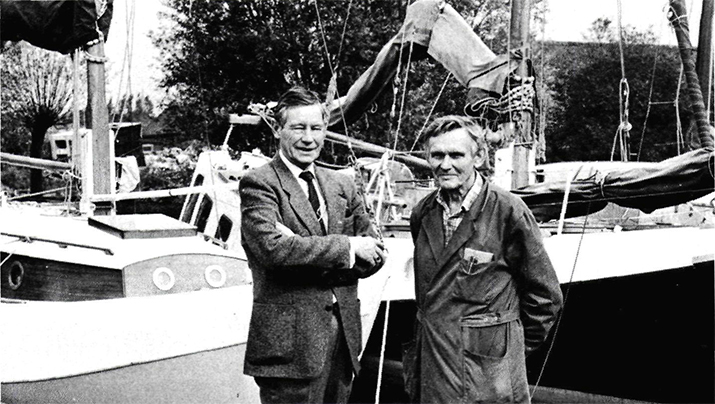 Wil (left) and Arnold Valentijn in front of two Gunning-yachts