Coming from the RAI you can reach the Apollohotel by walking through the Diepenbrockstraat, turning right into the Herman Heyermansweg. At the end you will turn left (Churchillaan) and then you will go right (Stadionweg) and find the Apollohotel on you right-hand side. (See map enclosed.)

If you were to make reservations, please mention HISWA to benefit from the special HISWA-rates.

We hope that the next winter meeting will be attended by even more members than last time.

As we would like to know the number of people coming as early as possible, those members who have decided to participate are kindly requested to notify us before 1 February 1989.

It would be highly appreciated if members who will not be able to attend the winter meeting will advise us accordingly.

Summer Reunion 1988
This year’s summer reunion was planned on September 23, 24 and 25. We were to meet in Marken Harbour on Friday night, have a race on Saturday, have a meal in Hoorn on Saturday night and we would sail away on Sunday to our own destinations. The only thing we could not plan was the weather. We had bad luck – wind force 9 with showers.

As a result we were forced to cancel the sailing. We attempted to inform all those members who had indicated that they would take part in this reunion, and we managed to inform most of the members about the change in schedule. Nevertheless, we had a very nice evening in restaurant De Waag in Hoorn; the food was delicious and the wine was perfect. However, we hope to have better weather on our next summer reunion.

News about Ships and Owners
Mr. P. Ide has ended his membership of the circle and the administration sent a letter to thank him for his efforts for the Alcyone Circle and his generous farewell-gift, on behalf of all the members.

Baron Bentinck sent us a nice letter to inform us that he had sold the “Sven” partly because of a respectable age of 81 years.
The new owner of the “Jonge Boer Jaep” is Mr. W.J. Pieterse from Nieuw Vennep. The ship will be renamed “Eenhoorn” which was the first name of the ship.

The new owners of the “Sans Rival” are Dr. D.T. Staal from Apeldoorn and Mr. J.H. Visser from Zuidlaren. The new name of the ship will be “Cormoran”.

Mr. May, the owner of the “Merhonour” sent us a letter in February this year about the trip that they made in 1987. Merhonour left England from Newhaven, crossed the Channel to the river Somme in France. They took the inland waterways to Strassbourg and returned via Belgium to Calais. The “Merhonour” crossed the Channel again and sailed up the river Thames through London and ended on the river Wey near Guildford.

Subscriptions
Since the administration sounded the alarm about the considerable backlog of certain members in paying their contribution, we are relieved to report that quite a number of members have paid their debts.

The administration will again include a note to report for which year’s contribution still has to be paid. If you disagree with the note included, please let us know.

The yearly contribution will be ƒ10.–, DM 10.–, £3.–, or US$5.– to be paid to our postgiro nr. 3721241 of the Alcyone Circle in Haarlem.
If you want to pay your contribution by cheque please use an international money-order. The costs of cashing a cheque from abroad are almost as high as the amount to be paid. 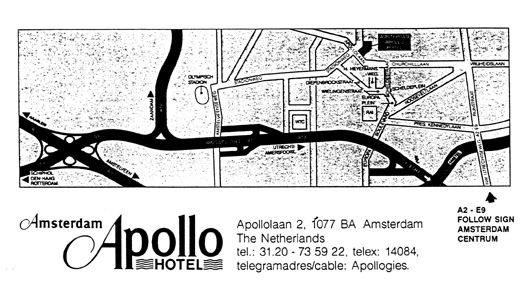 Agenda for the palaver on the Wintermeeting 1989
1. Opening and welcome
2. Report of the administration about the Alcyone circle
3. Summer reunion 1990
a. Amsterdam Sail
b. Alternatives suggested by the members
4. Other points raised by the members
5. Closing of the palaver.